In the vast majority of threaded fastener applications, there are valid reasons for opting for nuts or locknuts with flanges instead of using the “un-flanged” nut with a washer.  If the application calls for a deflected-thread all-metal locknut, there are additional reasons.  This blog entry will identify those reasons and provide supporting arguments.

The German Society of Engineers has published a standard VDI 2230 – Systematic calculation of high duty bolted joints with one cylindrical bolt.  The guidance and calculations presented therein will be applied to quantify the comparison of flanged and un-flanged (with washer) nuts, where that standard covers such calculations. 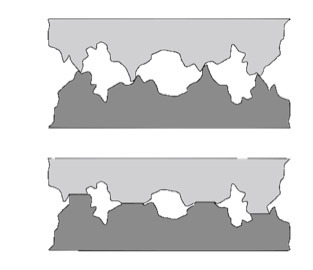 VDI 2230 dedicates paragraph 5.4.2.1 to the loss of preload due to embedding and relaxation. Table 5.4/1 addresses embedding, quantifying the effect.
VDI 2230 Table 5.4/1. Guide values for amounts of embedding of bolts,
nuts and compact clamped parts made of steel

Relaxation is loss of preload due to material creep under load, and is a function of stress, time, and temperature for a given material. Using a hex nut and washer instead of a flange nut introduces an additional inner interface, and the associated additional preload loss due to embedding and relaxation in that interface.  For instance, ISO 10683 briefly recognizes, but doesn’t quantify, the relaxation of non-electrolytically applied zinc flake coatings on the bearing surfaces of steel fasteners, because those coatings include a polymer resin matrix that can relax under typical load and environmental conditions.  Preload loss occurs because the clamped length decreases by the amount of embedding and relaxation, will depend on the initial clamped length and the stiffness of the clamped members and the bolt, and must be accounted for during assembly.  The preload loss happens after assembly, when the joint “starts to be used”, and so won’t be eliminated during assembly. Significant preload loss erodes the tension budget (the difference between the maximum tension that doesn’t break the bolt and the minimum tension that allows the assembly to stay assembled, minus design margins).

Loosening Torque
Paragraph 5.4.3 of VDI 2230 discusses assembly preload and tightening torque, and develops equation 5.4/20, restated below, for threads with a 60° flank angle.

where MAl is the loosening torque, and the more negative its value, the more a joint will resist loosening.  Many references (ISO 16047, DIN 946, etc.) approximate DKm as the mean between the inner and outer diameters of the bearing surface, or

where Db is the outer bearing diameter and Dcs is the countersink (inner) diameter.  I think the more accurate quantity is the diameter that splits the bearing area in half, which can be calculated as

DKa is always larger than DKm , and should be more accurate than DKm if the bearing force is evenly distributed across the bearing area.  DKa could still be a conservative approximation if the surface of the flange is concave, causing greater loading at the outer edge of the flange.
Since a flange nut usually has a larger Db than a hex nut, it will also have a larger DKm or DKa , it will require more torque to create a given tension force, and it will also resist loosening to a greater extent, which is desirable.  For example, a ½” flange nut with a bearing diameter of 1.00” and a countersink diameter of 0.53” has a DKa that is 25% or more larger, and a DKm that is 20% or more larger, than the 1/2” hex nut with a bearing diameter of 0.74” and the same countersink diameter.  In this case, the flange nut has 25% or more bearing friction torque than the hex nut.  Having a flange or not does not affect the friction torque in the thread interface.

Parts Count
Using a washer increases the parts count, requiring a 50% additional supply and inventory overhead and assembly complexity per joint.  Usually, the overhead and complexity can be directly converted to additional joint costs which outweigh any marginal direct cost difference between the flange nut and the hex nut plus washer.

Flange nuts have the advantage of the flange material supporting and preserving the start thread.  Hardened flange nuts can withstand significant radial deflection and still start the assembly easily, where a hex nut would not. 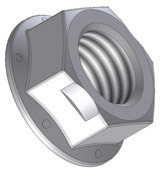 Radial deflection of hardened flange nuts, similar to the figure above, represents the greatest opportunity to control prevailing torque while still preserving ease of assembly start, compared to all other thread deflection techniques and configurations.  Without the flange to support the first thread, the performance or cost would be compromised, for

In Defense of the Hex Nut and Washer
I have seen arguments in defense of using a hex nut and washer, and offer these rebutting comments:

Summary
Removing an inner interface from the assembly reduces embedding and relaxation losses in preload.  And since the flange has a significant effect on the effective “bearing friction” diameter, the nut factor used for defining tightening should recognize the difference, and probably be determined empirically, but results in a higher loosening torque for a given bolt tension.  For all-metal prevailing torque locknuts, flange nuts with controlled flange concavity can offer better overall cost and performance and easier assembly when compared to the alternative of hex locknuts and washers.